The UCDA turned its attention to curbsiders soon after it was formed. Curbsiders, exploiting the financial gains of the underground economy and pretending to be honest private sellers, were seen as a dealer’s worst competitor.

Confronted with a doubting media and people in government who couldn’t see the problem, the UCDA set about making the term “curbsider” a word that everyone could identify.

A lot of time, effort, and money was invested in proving to all that curbsiders were injurious to the consumer, the government, and to the industry.

One of the most tangible results has been Ontario’s introduction of the UVIP programme, which requires private sellers to purchase a special consumer protection package. The Used Vehicle Information Package concept was established by the Ministry of Consumer and Commercial Relations and its implementation was led by the Registrar of Motor Vehicle Dealers.

While the UVIP initiative won’t stop curbsiding, it has already had an impact. As it matures and refinements are made to the process, it has the potential to reduce curbsiding to a minimum.

UCDA Members can be pleased that, through the efforts of their Association, together with journalists and the government, the public now know what a curbsider is and how they can better protect themselves. 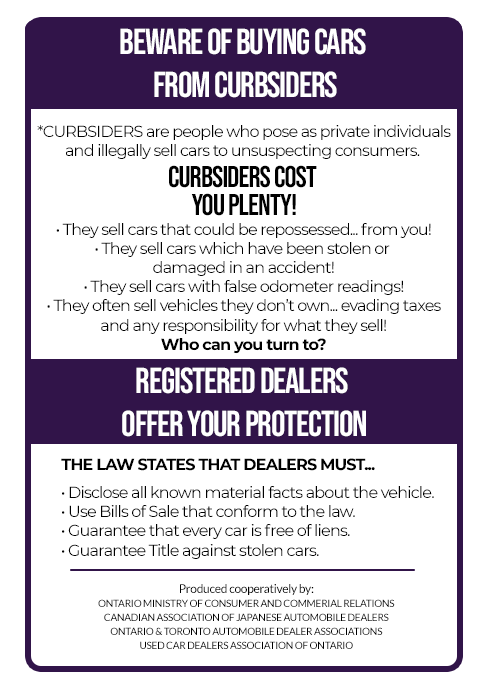